In the first 18 days of December 2015 BAGIRA group of volunteers took into their homes 31 animals to foster, a few puppy litters and adult dogs are being cared for by the group (food is provided by BAGIRA).

Volunteers foster the animals in their homes (usually small flats) and the financial support is provided by people like you.

Unfortunately,  this month’s adoption events  were not very successful.  The past 2 events none of the animals found their homes.

Look at the volunteers and animals standing outside for hours during adoption events: 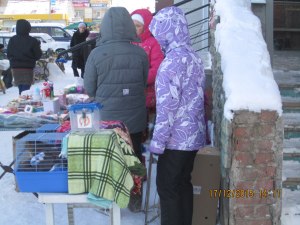 Adoption events are organized by the volunteers who foster homeless animals. All animals are previously dewormed and vetted.

This work cannot be done without your help!

Please make a small donation to BAGIRA group.  Anything will go a long way.

Thank you and happy holiday!

BAGIRA  is an organization that exists and works directly off of the donations received from general public. All Volunteers and organizers of this group are working as unpaid volunteers and all proceeds go to cover the cost of medications, transportation, food and surgeries.

A few days ago SV group received online post about little snow white kitten with blue eyes living on the street. The worried Samaritan wanted to make sure the kitten was safe before temperatures outside dropped (and they did, now it is snowing, yes, in October!)

One of the Volunteers went to  the meet with the lady who caught this kitten and her orange tabby brother.  Both were taken into their foster home followed by a vet check up.  As usual they had flee infestation, bloated bellies and ear infection.

The same day foster mom started noticing that snow white kitten was making circles as if her head was dizzy and she was spinning in one spot instead of walking (video).

The vet prescribed treatment which will be 4 shots a day for 40 days!  Snow white (let’s call her that name) is crying and not liking the treatment. She had stomach issues after the first set of shots and did not eat anything, but 2 days later she is doing mush better and her movement has improved. She is not spinning that much and walks almost normally.  See the video. 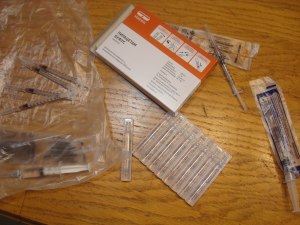 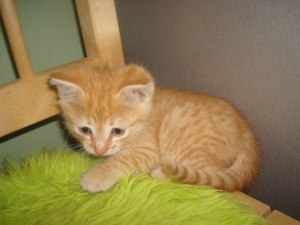 These kittens are two of many the Volunteers is caring for.

Please donate towards this group, anything will go a long way.

The founder of SV group was driving outside the city when she thought that she saw something in the grass on the side of the road.

Then she asked her husband who was driving to pull over and go back.

She was right and it was a little black and white kitten.  There were no houses nearby, only the roads. The kitten was left there to die.

After the initial check up we found out that the kitten has ringworm that is now being treated. The kitten is being kept separately from other animals due to ringworm.

The kitten is being treated for the infection.

The kitten is doing great! The Volunteers named her “Button” (or Pugovka – in Russian) because of her make-shift wiring. The swelling on the jaws has subsided and now she can eat on her own.  Also the rotten odor that was coming from her jaws is gone.

Button is receiving shots of antibiotics daily and all her stitches are being disinfected after feeding.

The only problem Button faces is the emotional: when she  hears male’s voice, she starts crying very loudly.  We suspect that whoever physically abused her was a male.  The good news is that Button is in good hands and we hope that she will soon recover physically as well as emotionally.

Button is a very polite lovely cat, she uses her litter box, eats well on her own and snoozes all day long.  After her complete recovery the Volunteers will be looking for her forever home.

Please help us make a difference in  lives of many animals like Button.  Please donate.  Any amount will go a long way in Russia.

On October 17, 2014 Valeriya was on her way back from college when she noticed a cat sitting next to a supermarket’s entrance with a head down.  There are a lot of homeless and stray animals roaming the streets of Russia, so this is not a surprising occurrence to see a cat or a dog or a puppy next to a house or a supermarket scavenging for food and warmth. But this cat was different than others. After the first glance at the feline, Valeriya thought that the cat was covered in snow but when she looked closer – the cat had burnt whiskers and her fur was burnt as well. Also the poor feline was very emaciated.

Valeriya could not just leave this poor thing there and she called her mother and told her with tears what hapened. Valeriya’s mother told her to take the cat to the vet and bring home after, and this is exactly what she did.

The vet confirmed that cat was previously torched and suffered some burns on her skin. After receiving a few injections the poor cat was released.  By the way this emergency care the vet provided for free.

Valeriya took the cat home where she continued taking care of the feline and decided to adopt her even though there was already a cat in the house.

This is a great story of a humane treatment of an animal! Thanks to Valeriya, her mother and the vet one more life was saved! 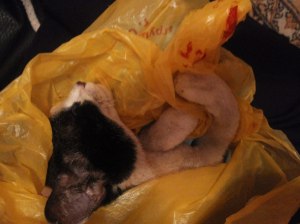 Now the cat is fully recovered and is about to be spayed by the SV group.

She still have some wounds on her ears and skin but doesn’t have any emotional wounds in her heart even after some human set her on fire.

People be kind and protect those who cannot protect and speak for themselves!

A few months ago someone witnessed how a puppy was run over by a car on purpose!  The puppy had open wound on her hind leg. 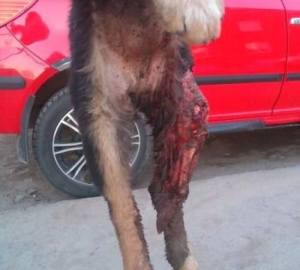 A compassionate person who saw the puppy crying contacted the APAC shelter asking to take the puppy in. She was a stray and nobody knew anything about her, so she was called Vita (means “life” in Latin).

A few hours later Vita was in surgery for amputation of the injured leg, vets could not save the leg and decided on the amputation.

Vita now is a gown puppy and she learnt how to walk and run on her 3 legs. She is a happy, easy going girl, in need of her forever home.

Vita loves people and everything around her! She is full of life and has not given up on people and finding a new home.

Please share her story to help her find a new home!

Daisy has been adopted!!!

It has been 2 weeks since Daisy is at her new place. She has an enclosure, a new cat-friend and a lot of farm animals around.

The new owners are happy with her and Daisy still “talks” funny.

Please see her story below:

Her story is the usual one – her previous owner did not want her any longer and she ended up on the street.  She was found on the side of a street in May dying (there is a post about her earlier). She could not move and stayed outside for a few days before a rescue group could find a foster care for her.

She was probably hit by a car, she had bone fracture and could not walk. Daisy got better thanks to her foster and treatment.  Look at the difference a kittle love does!

Daisy likes to talk, does not bark or squeal, just talks, you have to hear it! She is very obedient, she would never walk in front or pull you, Daisy waits until you let her go for a walk with you.

We are happy for Daisy!