Today 2 volunteers form BAGIRA group went to visit a stray injured mama dog with her puppies.
The place where the dog is located is outside the city with no access to food. The girls brought a pot of freshly cooked food which was gone in a few minutes after the mama dog started eating it. 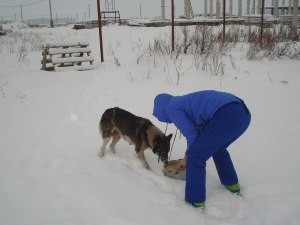 The puppies are still nursing and are weak.  After the dog ate the volunteers were able to put some warm blankets into the place where the dog sleeps.

As you can see, it is a very tight space just beneath the ground level. Currently nobody can foster this family, despite all the post online and pleas nobody could take the dog family in.  So the volunteers are doing what they can to make them survive by bringing them food and blankets.

When the mama dog was fed and saw that these people did not mean harm she allowed to have her wound treated.

As you can see the volunteers go far and beyond to save animals  even when it means to ask for donations, cook  5 kilogram of food and drive a few kilometers away from the city to feed the dog family.

Please donate towards this group, anything will go a long way.

BAGIRA  is an organization that exists and works directly off of the donations received from general public. All Volunteers and organizers of this group are working as unpaid volunteers and all proceeds go to cover the cost of medications, transportation, food and surgeries.

In September 2015 the SV group has fostered 81 previously stray animals.

14 animals were spayed and neutered.

The group has arranged 12 adoption events, pretty much haf of the month was spent driving animals to the adoption site.

Sterlitamak Volunteers are working hard to help reduce the population of homeless animals and find them good owners.

This week we scheduled spay and neuter surgeries for 3 dogs and 7 cats. The surgeries take place at the house of the SV leader and foster mom – Tamara.  Although it is a very simple makeshift clinic that might not follow all medical standards but it is the best possible option to have all foster animals together at the same place during after working hours.

The vet who was performing the surgeries is a well known in town and she worked for 5 hours straight.  In the meantime the Volunteers who foster animals had conversations over some sweets and tea.

It it is small group  of Volunteers with big hearts who do great things for well being of animals and society. 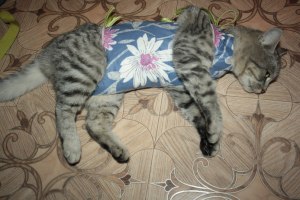 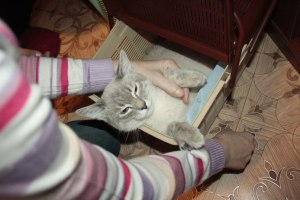 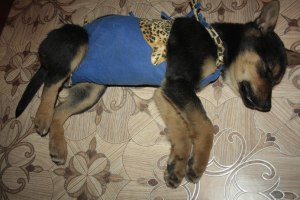 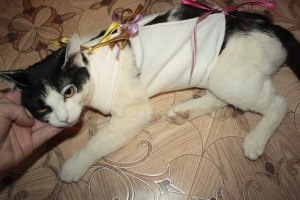 All these cats and dogs will be looking for their forever homes after the stitches are taken out in 10 days.  After being spaying and neutered they will have more chances of getting a home.

We need to schedule more surgeries for more cats, some of them are already pregnant and need urgent spaying.

Each surgery is about $14. The SV group receives no help from the government at all.  Each ruble and dollar is raised by Volunteers.

Please help us raise funds for the much needed spay and neuter surgeries and give homeless animals hope of finding a forever home.

Each dollar counts! Please help today tomorrow might be too late.

October 4th is World Animal Day and Volunteers in Sterlitamak, Russia held their 224th Adoption Event which lasted for five and a half hours.

As a result 10 (8 kittens and 2 puppies) previously homeless and abandoned animals found their homes.

The adoption events are held outside all year around, and today it was very cold, but that did not stop the Volunteers from taking their foster animals and going to the event!

To celebrate the World Animal Day the Volunteers had painted posters to spread  awareness about compassion for all animals, especially the homeless. 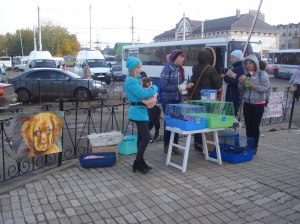 Pictures from the Event: 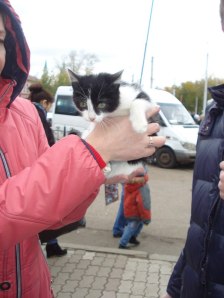 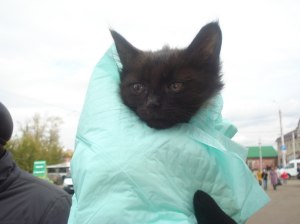 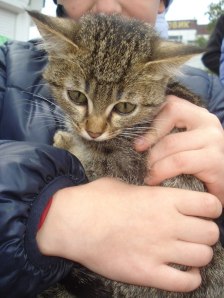 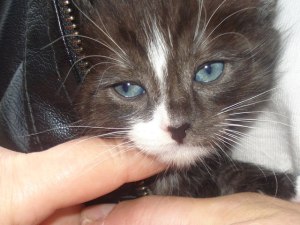 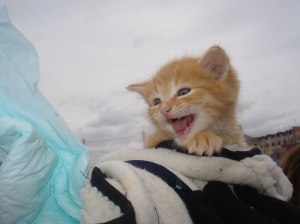 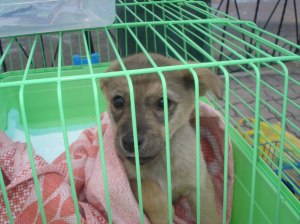 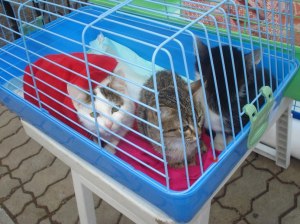 Please, do not forget about animals not only today but every day; do something for them because it can be a difference between life and death for them!

This post is to provide a glimpse into work of the Sterlitamak Volunteers. The volunteers are mothers, fathers, teenagers, students, elementary, middle and high school kids with their parents who support what they do ever single day – saving animal lives.

Despite homework, school, work, chores, and other problems of day-to-day life, the Volunteers devote their time and big hearts to homeless animals. As I have mentioned in my previous posts, in addition to taking animals from the streets and nursing them back to health, the Volunteers organize Adoption Events. These events take place outside of a Mobile Phone store near a local market. The management  of the store allowed the Volunteers to occupy a small space by the porch. They do not have any tent or seats, just the crates with fostered animals which they transport themselves from different parts of town and the country. Adoption Events usually run from 10 am to 6 pm. The Volunteers are on their feet for over 6 hours at a time without any shelter!

Adoption Events are hosted 3-4 times a week all year long! In Russia winter weather sets in around mid October and lasts until mid April. Summer weather lasts for just over 2 months. From June to September 1st school kids are on summer break. Some of them enjoy the hot wether but others, like our Volunteers, take care of homeless animals and organizing Adoption Events.

Please see a few pictures of Sterlitamak Volunteers at the Adoption Events: 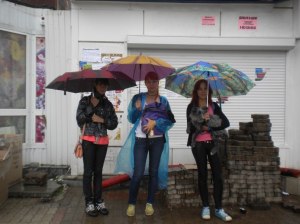 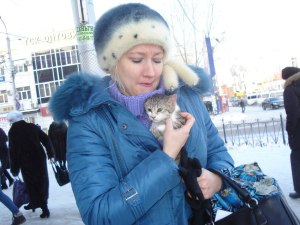 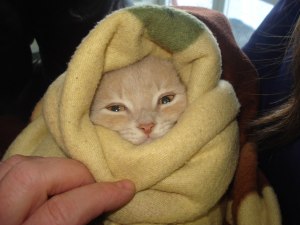 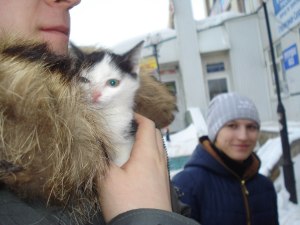 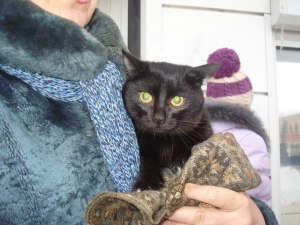 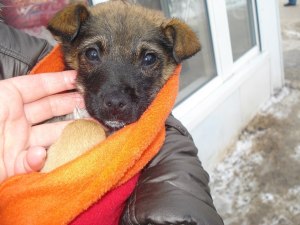 Yes, it is very cold in the winter and Volunteers keep animals warm by wrapping them into warm blankets or tucking them inside their jackets.

The summer season is almost over now and many Volunteers will go back to school on September 1st. Unlike their school mates, Volunteers did not have time to rest this summer.

For example, just this week 2 Volunteers brought a former stray dog to be spayed. They already found a home for the dog in the country side, an hour away from the vet clinic.  The cost of transportation for the animals was paid by these girls. The dog weighs over 40 lb! These 2 Volunteers had a foster cat also who needed stitches removed after a surgery.

As a result only this year Sterlitamak Volunteers found homes for 575 animals, please see pictures here.

As of today, 144 homeless animals were spayed and neutered, please see pictures here.

Everything from transportation charges/gas to vet bills, medications and food for animals is either fund raised by Volunteers or comes out of their pockets!  The Volunteers who are in high school don’t do it for Community Work credits, we simply do not have this type of requirement in our school system.

This shows a strong devotion to the cause of saving animal lives!

Russia is controlling homeless animal population by spreading poisonous chemicals and hiring firms with firearms to shoot all cats and dogs on the streets.

Yes, this is a sad truth! Many citizens of all ages become witnesses of these horrifying tactics. Also some Russian citizens take it upon themselves to kill animals, especially young children who learn from their adults – also become very cruel towards animals.

One of many examples of children torturing animals is about Timosha, a kitten thrown from the 8th floor of an apartment building by children (WARNING: GRAPHIC CONTENT!!! Video is included).

There are so many similar cases with happy, but more often with very dramatic endings for animals all over Russia. The Russian government is not doing anything to better the situation of homeless animals. The government decided to simply launch a murdering campaign of animals on the streets and, hence, making it “legal” to rid of homeless animals this way!!!

In this picture below is one of the homeless dogs that was poisoned recently in Sterlitamak. On the video, you can see another dog who also consumed the same poison (it happened in the same location) and dying the same way as the one in the picture. The black dog in the picture also died that day.

Homeless animals are not the only ones suffering – people who take their pooches for a walk also find their dogs and cats foaming at their mouths, trembling from convolutions and suffocation, and then dying within 30 minutes after they accidentally have consumed a poison from the ground on the streets. And this is happening every single day!

A group of animal right activists and volunteers started a petition addressed to the major of the city Sterlitamak asking to stop the killings and create alternative humane methods to control the population of homeless animals.

We hope that you can join us and sign this petition.

This petition is for people to see what is happening in Russia.

Gulnaz Rahmatullina is the creator of this Petition and one of the animal rights activists of Pravo na Zhizn (“Right to Live”, Sterlitamak, Russia).

Here is the translation of the Petition:

To:
Izotov Aleksey Nikolaevich, the mayor of Sterlitamak, Russia

These chemicals (poison) cause tremendous suffering to the animals: choking, seizures, foaming at the mouth and agony for 30 minutes!

You can see it in the video posted on www.vk.com by animals protection activists and animals lovers of Sterlitamak: (WARNING GRAPHIC CONTENT)

The poison is spread in public places such as schools, where children see these animals dying in agony right in front of them causing these children psychological trauma!

We, the mothers and children, are against animal cruelty! We, the citizens of Sterlitamak, think that controlling population of homeless animals using cruelty is inhumane and economically ineffective. By killing animals the population of homeless animals is not decreasing, it actually increases filling out the void created in nature (according to the specialists-veterinarians). Moreover, there is nothing humane and moral using these methods.

In our opinion, different methods to control the population of homeless animals must be implemented. These methods are to:

1. Launch overall spay-and-neuter programs for animals;
2. Open foster care and shelters for homeless animals;
3. Create and implement social and educational campaigns for the people, especially children in schools, about ethical treatment of nature and animals via humanitarian ads, banners, flyers, television, newspapers and other types of media. The purpose of such campaigns will be to inform people about how important it is to sterilize their animals and will teach people that they are responsible for their pets.

These methods have already been used in many cities in Russia, throughout entire Europe, in some Latin American Countries and even in some African countries.
We are hopeful that our plea to Izotov Aleksey Nikolaevich, the mayor of Sterlitamak will be heard and our Golden City, as they call it, will start using humane methods to control the population of homeless animals.

Pravo na Zhizn (“Right to Live”, Sterlitamak, Russia), the animal activists group has organized many demonstrations in their city to protest the “legal” cruelty against animals, but, unfortunately, their manpower is scarce because fear of people with power prevails.

You can find the petition here:

We have already reached almost a half of 5000 needed signatures. We need your help! Please spread this petition and sign it! Leave a comment of support for the animal rights activists in Russia!